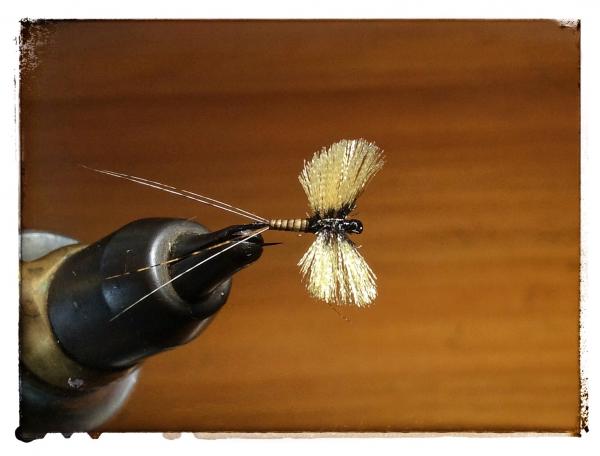 During the final stage of the Mayfly’s lifecycle, the spinners possess a quality of beauty and delicacy. Their up-and-down mating dances vary in tempo, stream location, species and water type.  But, when the party is over, the spent flies alight, falling like tiny snowflakes to the water, dying, wings spread wide.

The trout look up.

The Mayfly Spinner rates among my all time favourite dry fly patterns for mountain streams. Not that we have prolific hatches on South African waters and subsequent spinner falls, but the distinctive profile is familiar and recognisable to the trout, something they have seen, eaten and enjoyed before - easy pickings unable to escape and the trout know it. In a generic context this little fly simply looks like a bug of sorts, it will attract attention even when the naturals aren’t about. I first used to tie the fly with the conventional hour-glass style for the wings, but more recently have had a preference for the Ellis Triple wing method. Although a little more complex to tie, it has improved the patterns appearance resembling more closely the wings of the natural insect, and I believe with it the success rate.

It is not the easiest fly to follow on the water so to assist, if needed, I attach to the tippet a tiny bead of Loon Biostrike putty or a small Elk Hair Caddis a maximum of 30cm up from the fly. This allows me to track the position of the fly and I can react to any movement behind the indicator."

Give this one a try and perhaps as with my experience, even when there are no spinners on the water, you will find that this little fly will with regularity get the trout’s attention. 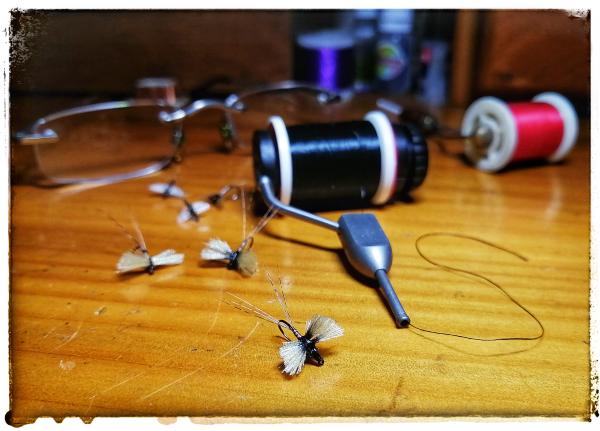 Tail - Coc de Leon. The natural insect has two or three distinctively splayed tails depending on the species. However, I don’t think the fish mind so I generally use four Coc de Leon fibres and split with two on each side (see pic 1) by taking the tying thread under the tail and between the CdL fibres. The tail should be approximately one and a third times the shank length.

Abdomen - Stripped Peacock herl. Wind the peacock herl forward in touching turns to about one third shank length behind the eye and secure. I treat the abdomen with Solarez UV resin to strengthen the herl. (See pic 2). As an alternative, you can also create a tapered thread abdomen, but keep it delicate like the insect.

Wing - organza. I have a preference for the shiny threads stripped from wedding dress organza for the wings, easier to handle and trim into shape than other winging materials. Organza is available at most haberdashery shops in a wide range of colours. You are usually asked to take a minimum of a meter. That will last a lifetime even if you share half with your mates. In simple terms you tie three hour glass wings individually, hard against each other and working forward from the first which is secured where you finished the abdomen. (See pic 3 for the first of the three parts to the eventual wing)

Once the three parts to the wing are complete and secure, form a small head behind the eye with tying thread and whip finish. At this stage I manipulate the organza so that the wing is as neatly seated as possible before adding a small, and I mean tiny, drop of Solarez UV resin to the base of the organza over the thorax. It bleeds a little into the organza and when hardened the wing will hold its position. If you add too much, it will bleed too far into the organza and harden the entire wing, you don’t want this to happen.

Finally, remove the fly from the vice and trim the wing to create a shape similar to that found on the natural. (See pic 4) This broader wing will give a good representation of the spinners lying flat on the surface of the water.

For photos of the tying sequence see photos below. 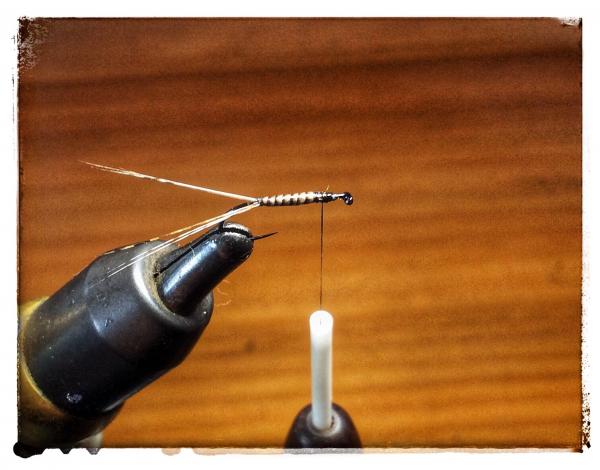 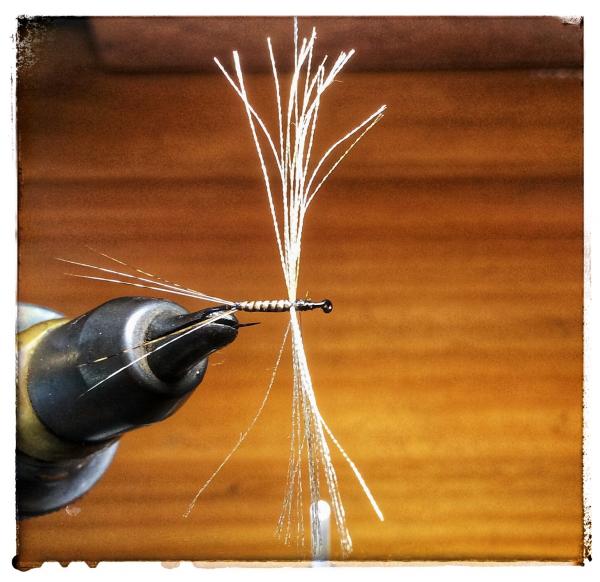