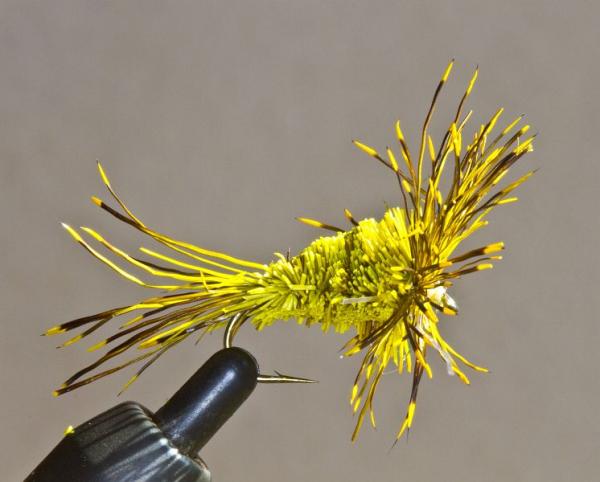 A useful dry fly for lake and river fishing, a good DDD needs some care and attention to tie properly. It also needs practice and it’s not easy to just sit down and tie your first DDD just right. I’ve been doing them for years and if I’ve been away from my tying desk for a couple of weeks the first few I tie always end up looking like fresh windscreen kills.

What you will need to tie this fly

You want a standard wet fly hook in size 8 to 12 (1X long shank preferably) for lakes and down to size 14 for streams. Because I often fish DDDs in lakes with seriously large trout in them, I tie the odd large patterns, say size 8 (occasionally size 6), on extra-heavy wire, wet fly hooks.

Kevlar thread in pale tan, yellow or olive is helpful for the strength it brings, but you can get by with 6/0 UNI-Thread. Use a patch of coarse deer hair, or Klipspringer. It’s interesting to compare the differences in Klipspringer pelts and I always try to use one with stronger markings, particularly for the tail. Klipspringer hair dyed yellow is very attractive and I tie most of my DDDs with dyed yellow hair.

I sometimes add piece of pearl Krystal Flash (or equivalent) tied at right angles to the hook shank just ahead of the trimmed body and behind the hackle.

If you decide to use cock hackle at the collar then choose a wide hackle and tie it in fairly dense. I used to mix grizzly and brown, but of late I stick to hair collar hackles.

Tying steps  - Scroll down for the photos.

To tie in the tail first wrap a small blob of thread just before the bend, or just above the barb. Keep the rest of the shank bare, but make sure your first wraps are well anchored.

Cut a modest bunch of hair and measure the fibres against the hook shank so that after you secure them they extend back roughly one-and-a-half times the shank length. I don’t use a hair stacker to even the tips as I prefer a more natural spread of tail fibres of different lengths.

First trim off a significant portion of the butt ends of the hair before you tie in the tail. This is an important step and the reason will soon become apparent.

Tie in the tail fibres only a few millimetres from the end of their butts. Normally we tie in deer hair roughly in the middle of any sheath of hair fibres, but if you do this now it becomes hard to separate the protruding butt ends from the hair you want to keep for the tail fibres when you come to trim the fly.  In other words, the shorter fibres near the tail will help you to define the actual tail fibres you want to preserve when you come to do the final scissor shaping and trimming of the body.

Your first tailwrap should not be too tight because that will make the tail fibres flare too much. But certainly tighten the second and third wraps then spin the hair. You now have the tail in.

Spin further bunches of hair along the body and between each use your nails to tightly compress the fibre bunches together. Cover only three quarters of the body with spun hair, leaving at least a quarter of the front of the shank bare to spin in the hair collar hackle.

Once you have covered the shank and have compressed the hair, tie off, remove the fly and trim it to a rough conical shape. Try not to do this with anything like surgical precision otherwise the fly will look too neat and tidy.

Trim the underside of the fly first making it flat underneath right back to the tail. This will help keep the gape and barb of the hook exposed. Then angle your scissors inwards from the front of the fly to the back and trim the sides of the body into a cone shape. In the tail area, make sure you don’t trim right up against the hook shank because then you will cut off a few precious tail fibres. Now trim the top of the body, again from front to back, sloping downwards from head to the tail.

Once trimmed, put the hook back in the vice. You can add a strip of  Kristal Flash at this point if you want. It’s an optional step. If you do go for it, tie in a single strand at right angles to the hook shank and trim so that each end is about two centimetres long.

Cut a bunch of hair about the same size as you used to form the tail. Stack the bunch in a hair stacker. Make sure that you trim the butt ends of the hackle hair fibres short to start with and measure the length of your hair collar by holding the butt ends against the top of the spun body (see drawn diagram below from my book The Elements of Fly Tying ).

With the hair butts pressed up against the body hair of the fly, align the butts so that they are level with, or the same height as the body. Now when you spin the hackle the butt ends will merge with and add to the body hair, while the points will radiate out giving a really buggy look to the hackle.

At first the hackle fibres will fan out in a forward pointing cone over the eye.

Push these fibres back with your nails and build up a head with wraps of tying thread. This will help the hair hackle to stay put in the right position. Now form a good head and tie off. Done!

This is a useful dry fly for prospecting on lakes, but it works well enough in rivers.

As I said I like tie them in natural and yellow and preferably with a collar of deer or klipspringer hair rather than cock hackle, but results prove that the DDD works well enough tied with a conventional cock or even hen hackle. If you use conventional hackle, try mixing grizzly with brown or ginger hackles as you would for an Adams dry fly.

I prefer using a long leader when I’m fishing the DDD on lakes, say 12 foot long and ending in 3X. To this I add a loop and connect a short tippet of 4X. If you use a conventionally long tippet the wind plays havoc with the fly and scrambles the leader and tippet. So I keep the tippet at around 12 to 14 inches so I can punch the fly into the wind and still have it turn over nicely.

But having said that, you want a longer leader to help avoid drag and for that it’s better that the leader doesn’t straighten too much.

Dress the fly lightly with silicone gel or whatever floatant you prefer.

There’s little doubt the DDD imitates a terrestrial insect and you can take your choice from beetles or grasshoppers, but it matters little. The pattern bristles with enough triggers to represent a heap of different things. There’s bulk in the water, yet with movement from the hair hackle and long tail fibres, and there’s a general buggy look to the pattern as well.

For understandable reasons the DDD fishes best on sunny, windy days when there’s chop on the water. In those conditions they are optimally visible to fish and the choppy water conceals fish and makes them more confident to take. But there’s another reason the choppy water helps. It rocks the fly and creates movement!

I get most takes between 11:00 am to 2.00 pm and again that stands to reason because that’s when terrestrial activity is optimal. Windy days are best because the wind blows terrestrials onto the water and adds the chop to the surface. I always search out wind lanes on lakes and drop my DDD right along the edge of it.

I fish the DDD with a heap of confidence, which I think helps with any pattern’s success. On lakes I drift them with the wind, by throwing at a right angle to the float tube against the wind, letting the fly drift through a 45 degree arc until it is right ahead of me. Or sometimes I throw them straight into the teeth of the wind and let them drift back towards me. That way you get much less drag.

I twitch them slightly at times, but always very gently, just enough to make the fly kick, and I never twitch the fly if I’m getting spontaneous takes.

DDDs fish really well close to structure, like reed beds, weed beds and the rip rap of stones on dam walls, but you want the fly in very close to the structure, or in the case of dam walls, close to the rocks. You leave the fly bobbing and drifting for 20 to 30 seconds, then slowly lift off, cast again and let it ‘plop’ back onto the surface. DDDs don’t need gentle presentations. They do better when they smack onto the surface with some authority.

I sometimes use a DDD as an indicator fly to drift sub-surface nymphs, particularly bloodworm imitations and flashback patterns. There’s always a problem with line wrap when you drift a nymph a long way behind a dry fly (which you mainly should because you want to get the nymph deep), but a trick I use is to tie a really short piece of nylon to the barb, say 12 inches, and fish a big neutral density dragonfly nymph imitation behind it in mid- to shallow water with slow twitches.

The final and most important point fishing the conventional, single DDD as a dry fly is never strike early. Let the fish take the fly, turn down and only then lift into it. I don’t think the word ‘strike’ has a place here. 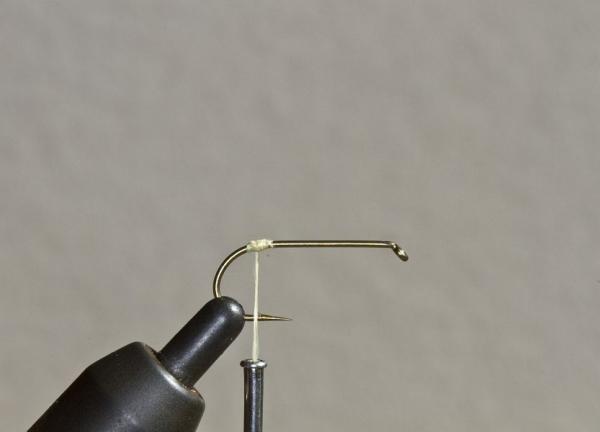 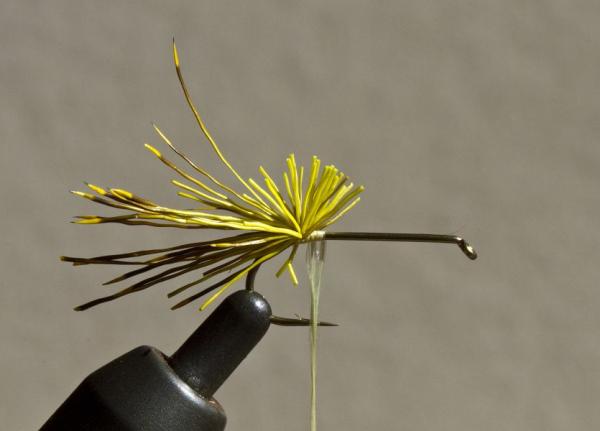 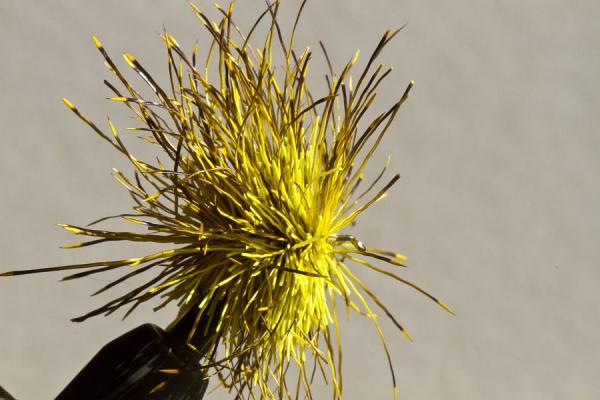 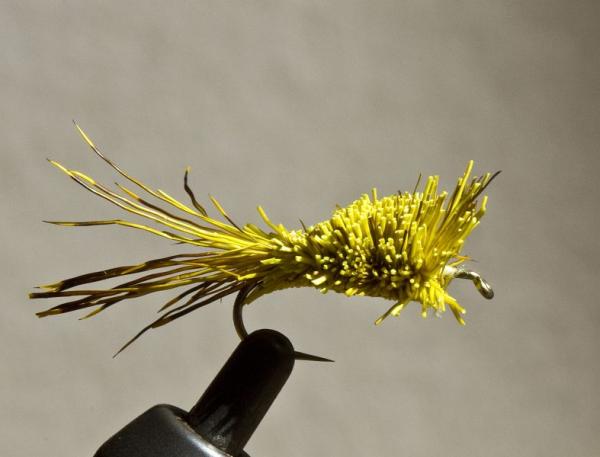 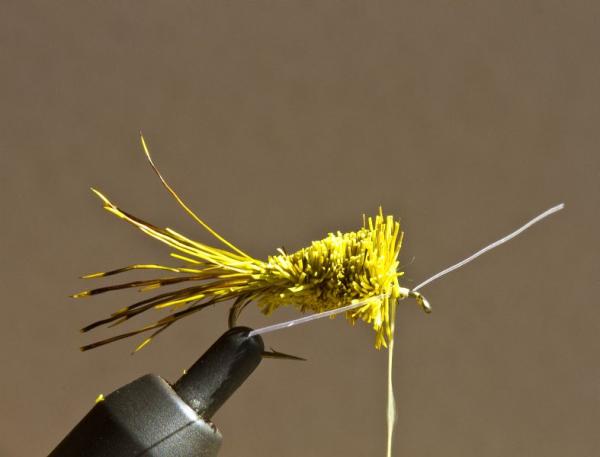 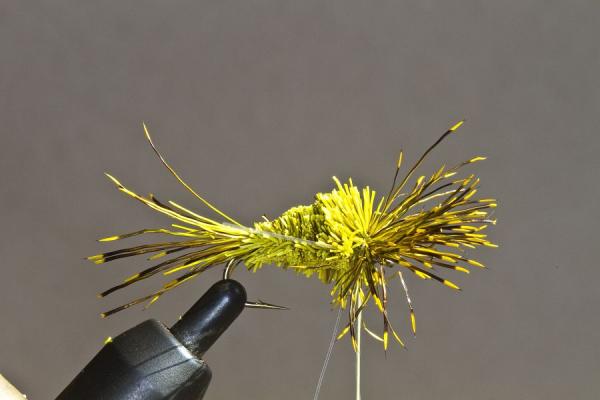 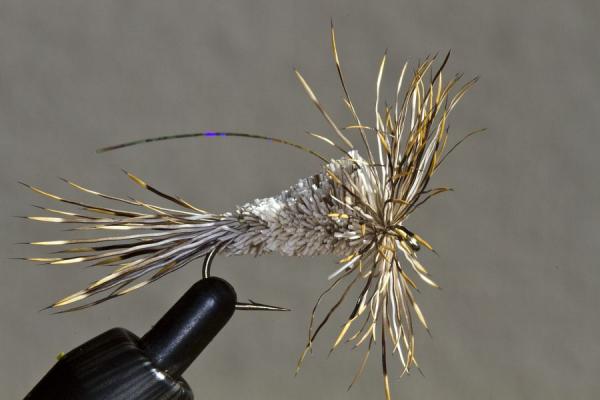 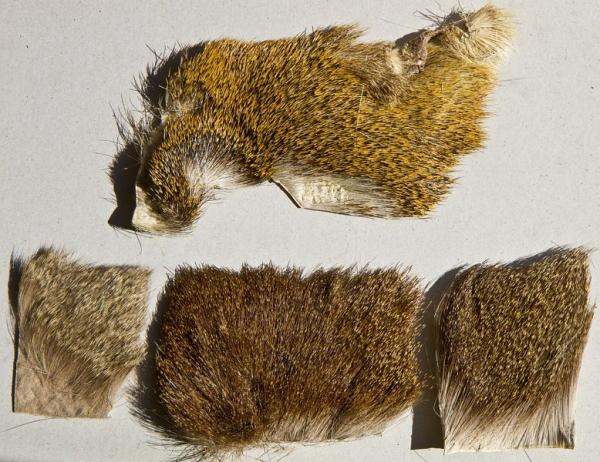 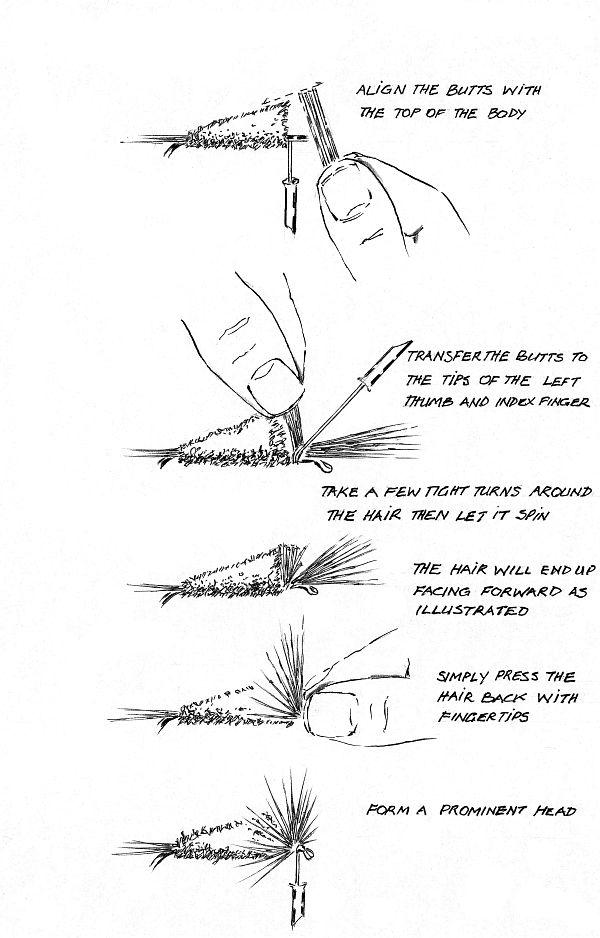 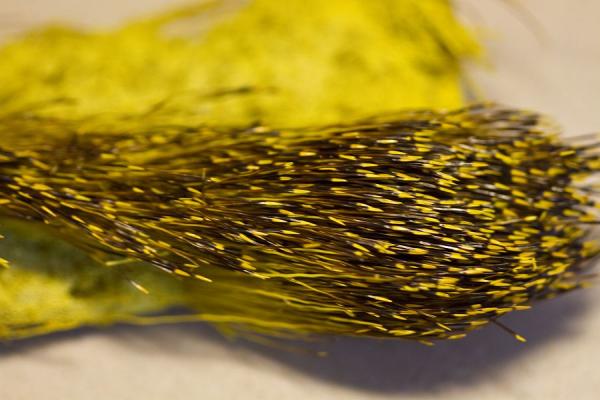