Hobson’s Original Tadpole is an imitation of the tadpole stage of the life cycle of the Platana, Xenopus Laevis, commonly known as the African Clawed frog, which occurs prolifically throughout our water systems in Southern Africa.

The Platana is one of the greatest food sources in our still waters, because of their ability to adapt to localized conditions. Their instinctive urge for survival means they are very adept at breeding at every opportunity, usually after heavy rains, be it winter or summer. Each female can lay up to one thousand eggs at a time and can repeat this every month. Thus they become an all year- round food source available in huge numbers. Metamorphosis from a tadpole into an adult frog takes 49 – 64 days. As the tadpole develops it is a good idea to match the size of the tadpole in the water, thus we tie it up in three different sizes. These flies produce big fish, hence we now tie the fly on the extremely strong Daiichi or Gamakatsu Octopus Carp hooks with a wide gape. 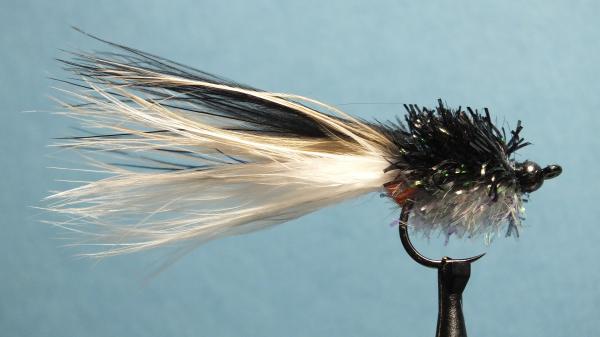 TAIL ;  First tie in a piece of Orange wool along the shank of the hook and cut it off placing your scissors against the bend of the hook.  Make the length of the Marabou tail twice the length of the hook shank.  Use Hareline X-Select Marabou white on the underside/bottom with two strands of blue flash tied on top. Then tie in Hareline  X-Select Tan Marabou with two more strands of blue flash tied in above the Tan Marabou. On top tie in  Hareline Black X-Select Marabou.

COLOURING; Take a Black permanent marker and colour only the top half of the Chenille Black, leaving the under belly the white colour of the pearl Cactus chenille.

Retrieving the fly: Tadpoles don’t move very fast but bobble up and down or along the bottom by wriggling their tail. Do a long retrieve but as you are doing this bounce your trigger finger simultaneously as you strip, this creates the bobbling/wriggling movement just like the tadpole. If you do it slowly the fly moves slowly along the bottom. If you retrieve quicker the fly will lift, move upwards with the marabou tail titillating, then pause for two seconds allowing the weight of the bead to make the fly descend and the marabou tail will titillate on the way down, imitating the movement of the tadpole as it falls to the bottom.

Where to fish the fly: Fish the fly where you can see tadpoles moving, this is usually in shallower water, gradual sloping banks of mud or clay or next to weed beds.

Notes: If you strip the fly very fast the fly is often mistaken for a minnow. Interestingly this pattern has found its way all around the globe and has fooled Brown Trout in New Zealand, Trout in Australia, the United Kingdom and the U.S.A including native cut throats and has caught sea Trout in Denmark, Pike in British Columbia as well as Steelhead and salmon. 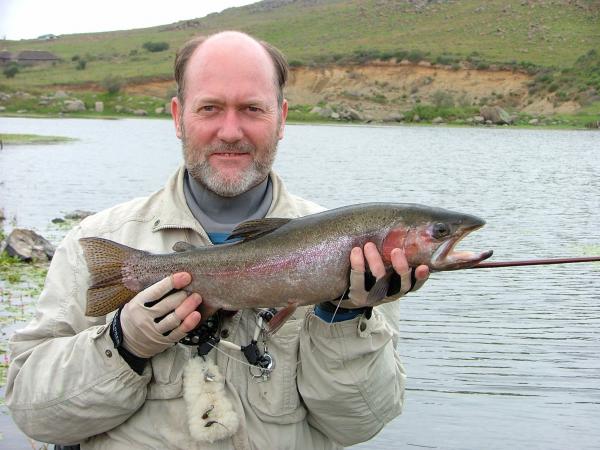 Alan with a Hot fly caught fish at Thrift