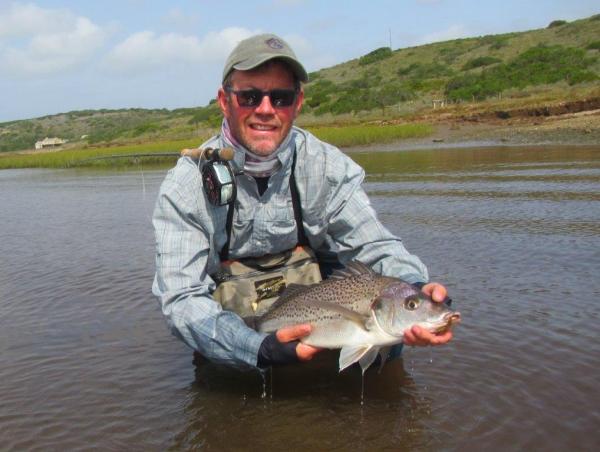 It has been said that fewer people on the planet have caught Spotted Grunter (SG) on fly than Permit. Kyle Reed who guided at Alphonse states in his article on the G-Route spotted shrimp that they are as tricky as any saltwater flats fish in the tropics. On the Garden Route, we have some world-class saltwater fishing on our doorstep, but hooking one remains one of fly-fishing’s great challenges.

Expressions like “fish of a thousand casts”, “paying your school-fees” reinforce the view taken in the introductory passage in FOSAF’s Vol 2 handbook on Spotted Grunter that Pomadasys commersonni is and remains one of the most difficult fish to catch on fly.

I was first introduced to sight-fishing to spotted grunter by ex-Tourette guide Pierre Swartz about 5 years ago. We stalked tailing fish in mid-calf deep sandflats on Sedgefield’s Swartvlei, throwing Prawn Charlies and Tan Shrimps of various design at any fish that came within range. Needless to say, we blanked on our day out, but not being one to give up, I was out each day until I finally managed to pouch one. It stuck and I was hooked. Our family was living abroad at the time, but the intrigue of anticipating the swim path of a Spotted Grunter in knee deep water and somehow convincing it to suck in your chosen pattern stuck with me.

In 2017 we made a decision to return to South Africa, which would have had many raising their eyebrows and asking what were you thinking, but coming home for family reasons got the better of any logical thinking. But there’s more …. I gave up a successful career in finance (and the comfort of an office chair and air-conditioning) with Caterpillar Australia to try my hand at providing a guiding service on the Garden Route, with primary targets being Spotted Grunter, Garrick and Kob. Tidal Loops was up and running.

A few years on, and yes, I have been fortunate to have caught quite a few Spotted Grunter, and guided a number of clients onto catching these elusive shadows, mostly sight-fished.

But just as you start believing that you have cracked the code to consistency, a couple of blank days bring you back to earth and your confidence starts to wane.

The estuaries from Plettenberg Bay to Sedgefield tend to have exceptionally clear water, which probably explains why catching spotted grunter can be such a challenge. Many locals and visitors would rather throw a lure or fly at Garrick that readily smash anything thrown at them, and then there are a few that choose to cast a surface stick bait at Spotted Grunter, which for some inexplicable reason produces better than expected hook-ups.

Then there are those who take up the challenge of casting a Tan Shrimps, Prawn Charlie, Articulated Deer Hair patterns, AGHA’s, Iron Man imitations, and whatever else they believe to be the one that will work at our beloved Spotted Grunter. There are also a number of crab patterns, even bonefish flies that can, on the day, get you a spotted grunter. A number of highly accomplished fly-tiers, both commercial and local innovators offer a range of patterns that on the right day, deliver results, often best suited to the waters they themselves fish.

But in my opinion, having success consistently in these estuaries relies on a number of important considerations

Ideal conditions for me are a rising or dropping tide, preferably on clear sandflats, with the sun behind you, and a slight ripple on the water for ideal spotting.  As the sandflats get flooded, the spotted grunter move into the shallows and actively feed. Hopefully, this happens, but some days you gaze across what appears to be a perfect piece of water, seemingly devoid of any activity.

There is also often some nuisance value with free-floating water grass catching every cast, so try to get onto the water after the grass has pushed past your spot. Many of the estuaries are often closed to the sea, with no tidal influence to consider. In that case, pick your time and make the most of the most suitable conditions. Present the fly as close as possible to a sighted spotted grunter and once you sense that your offering has been seen, start with a slow retrieve, increasing steadily should the fish turn and start following. You will feel a slight resistance as the fly is inhaled, and I like a short and sharp strip-strike to set the hook, and then it’s game on.

There is also some merit in fishing low light conditions, my understanding being that reduced visibility improves your chances, but this is not ideal sight-fishing conditions.

As for my patterns of choice, my go-to is a very basic neutral density shrimp / prawn pattern in size 4 or 6 in tan and various shades on olive as my first go-to fly. If I don’t have any success, I try a couple of the commercial sub-surface patterns, and then move onto the floating patterns. I often have conversations with fellow fly-fishermen on the merits of imitative versus suggestive, and I would be the first to say that I tie what would only pass as a suggestive pattern, but they do produce results.

The estuaries further down the coast don’t always have crystal clear water, and it is on these waters that the floating prawns imitations really come into their own. For some or other reason, the Breede Spotted Grunter readily accept a variety of foam and deer hair patterns on a dead drift or very slow retrieve. However you fish, it is important to keep contact with your fly - these guys are difficult enough to catch, so every chance you get must be taken.

SA’s golfing great Gary Player once said something along the lines of the more you play, the luckier you get, and this is no different when targeting spotted grunter. Try to become acquainted with the waters you fish, or plan to fish, speak to the locals, use a guide if you have limited time, then get out on your own to apply the knowledge gained, and apply a few of the basic guidelines offered above, and you are giving yourself a fair shot at achieving success.

It may not happen on your first day out, it seldom does, but the satisfaction when you finally hold a spotted grunter in your hands and hear that deep grunt that characterises spotted grunter out of water will keep you coming back.

But one thing remains certain. Never for one moment, believe that you have all the answers to consistently catching spotted grunter on fly. They can put you back in your place in no time, leaving you in no doubt that this very special South African fish remains an enigma, and that you do not know all there is to know. 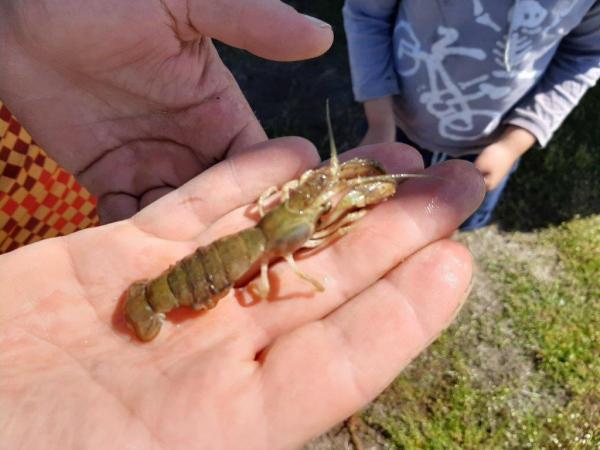 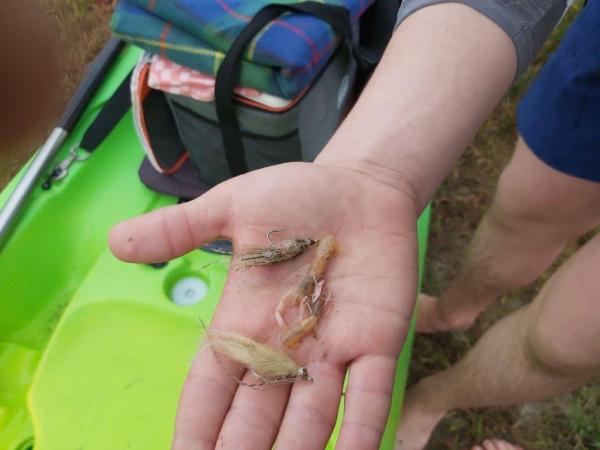