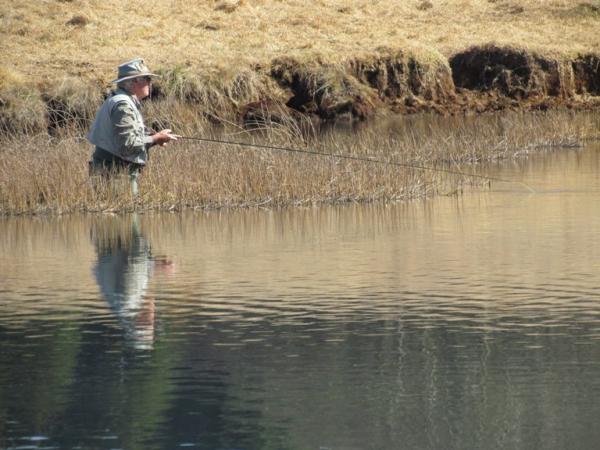 So much has been written about fishing the very margins of water, whether it be the very edges of a stream or river, or throwing a fly almost into the reeds on a Stillwater. In addition to this, stories abound of anglers catching, or missing fish, as they draw their flies from the water.

Despite this, the standard protocol remains for flyfishers to walk to the edge of the water and begin casting 10 to 20 metres or more from the shoreline. This is especially so of our Stillwater fly fishing. On our stillwaters there is an even less logical tendency of anglers to jump into a float tube and paddle out into open water before removing the fly from the keeper.

When I hear of Stillwater flyfishers who later take up stream fishing, I also hear of the difficulties they have in managing rank streamside vegetation. This dovetails with the fact that a great many Stillwater flyfishers fail to stalk water or stalk fish, and are focused on fishing clear, weed free water, away from the margins of the lake.

I think that flyfishers miss out on a lot of very satisfying fishing when they fail to view a Stillwater, and its margins in particular, as a piece of water to be stalked.

Even experienced Stillwater flyfishers continue to be surprised by big fish feeding remarkably close to the edges. Normally surprise is what characterises the encounter, and the fright is all in the fish, which scuttles off to safety.   And yet, approaching the edge of the water with great stealth, seeing or suspecting a fish there, and catching it in just inches of water, has to be one of the most satisfying experiences you can have on a lake.

I think the secret lies in identifying which conditions are likely to bring fish into the margins, and then fishing the margins very deliberately when you encounter those conditions. In this way you limit your use of the technique to times when your anticipation is high. In this way you will likely do better than if you try to force a new habit of fishing the the edges every time you approach the water.  Fly fishing is a confidence game, so learning to identify when you will be justified in having great confidence in fishing the edges, will go a long way to ensuring that when you do so, it will be attentively.

Generally, fish will come to the edge when there is cover, or when the food is so worthwhile that it warrants taking the risk of being in what is often shallow water.  Cover is supplied by steep, wooded, or shaded banks. That may be cliff banks, or forest margins, or perhaps merely banks with rank grass growth. Any shadow is also cover. Another type of cover is dirty water, or wind-whipped water. Typically this is found on the leeward shore, and so many flyfishers doubt their ability to fish into a wind, and so miss some great opportunities.   Fly-fishers doubt their ability to cast into the wind, because they over-estimate how far into a wind they need to cast.  Just the other day a colleague and I got caught in a westerly gale, that sprung up suddenly and blew into our faces. Since it was a long walk around the lake to the other side, we persisted for a short while. From a casting point of view, it was just a joke, and a disaster. We couldn’t get the fly much more than a rod’s length from the shore!  From a fishing point of view, it was superb. Within minutes the shoreline was whipped into a band of clay coloured water, and my colleague cracked the code, throwing a minnow imitation into the edge of the dirty water, not more than 3 metres from the water’s edge. Yes. Three (3) metres! Our leaders were probably longer than that, but we couldn’t cast those, so we were putting out about 10m of line to load the rod, and the leader was landing in a mess, which gave the fly time to sink.   Fish were snapping at the fly, and surfing the waves in after them to grab them at our feet at times.

Regardless of which way the wind is blowing, wind is itself a type of cover, because waves obscure the fish from predators overhead. Since fly casting is impeded by wind much of the time, we tend to speak negatively about wind, but fortuitously, when there is a chop on the water, we often don’t need to cast so far anyway.

Another type of cover that makes fish a bit more bold about going into the margins, is darkness, or low light.  In the late evening or early morning, or in dull grey weather, fish spotting (by fish eagles and fishermen alike) is more difficult, and fish get more brave about coming in close.

Fishing the margins does mean dealing with vegetation. That may be bankside vegetation that you hook on a back-cast, or it may be water weed, which, in shallow water, you are quick to catch. To solve this, part of the task is simply in upping your game, by practicing high back-casts and learning to deal with vegetation all around you. I know of no shortcuts there, except to say that if you avoid vegetation, you will never conquer it. So, don’t be like the tennis player who runs around his back-cast to avoid having to perfect it:  just get stuck in and work through the frustration and acquire the skill.  There are however a few things that you can do:

If you are hooking the bottom while fishing the margins, fish a floating line, perhaps even a floating leader butt, and an unweighted fly.   Maybe try a dry fly.

You should also include in your thinking, the roll cast. Have you ever used a roll cast on stillwater?  Probably not. If you consider it an option, knowing the limitations of distance that it imposes, then your mind is reaching the correct outlook on fishing the margins.

If the short casts are proving difficult to straighten out, then try shortening the leader, so that you can get some line out, to load the rod. Or perhaps better still, is to keep your long (and more stealthy) leader, and cast along the shoreline. If the wind is on the wrong side to do this, you can walk around (like a tennis player walking around his back-hand…..), or you can perfect your back casting, or casting over the other shoulder.

If you are fishing over deep water, and the wind is blowing at you, you might want to switch to a sinking line. Sinking lines are more slender than floating and intermediate lines, and cut into the wind better. Their weight also makes them easier to throw.

Getting into position may also be easier if you wade. So many flyfishers wear waders to float tube, but are seldom seen wading into the margins.

On the topic of  float tubes:  Remember that, particularly in our clear winter water, a float tuber’s legs dangling in the water, and his rocking tube in a flat calm, make him visible to fish within a country mile.   With this in mind, you should not float tube as your default starting point. This is especially so on a small water. I see float tubers on a tiny dam, with their rocking casting motion causing waves that lap at both sides of the dam!  Quite frankly, this is ridiculous.    Having said that, a float tube is a useful tool for fishing the margins. By that I mean that you can fish towards the edge of the dam, landing your fly in the reeds and retrieving it back out into open water. This is useful where there is a cliff at the waters edge, or an impenetrable forest.  Remember however, that you are still very visible in your tube, and I would therefore advocate fishing from a long way off the shore, and putting in long casts, assuming of course that you are able to do this with some delicacy.

Since the margins do have more vegetation in them, you might also want to switch to a single fly. Remember that you are now stalking fish, many of which you might have seen, so having fewer hooks in the water is not a handicap. In addition, there are fewer things to hook the grass and weed if you have only one fly in there.

If there is one thin g to take from this piece…..and I have mentioned it above….you should be stalking the margins. That is to say, keeping low, moving slowly, and stepping lightly, followed by short casts. Put in another way, the margins of a lake should be fished as if they were a narrow stream. If you can get into that head-space, you are opening up a wealth of rewarding fishing experiences.  Try it! 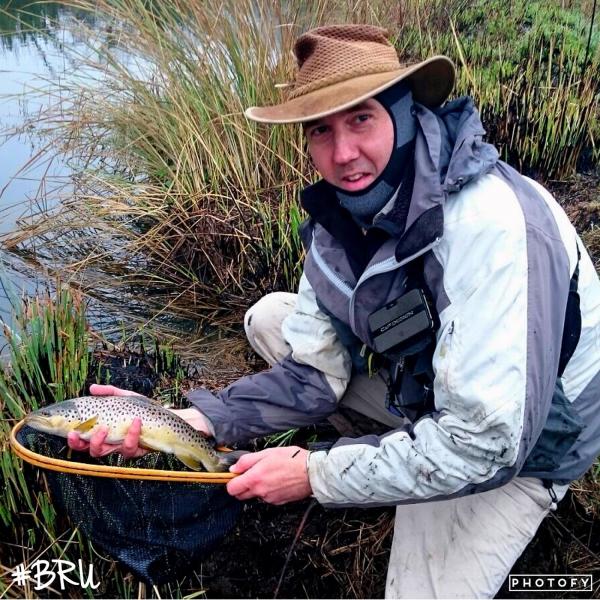