The Dullstroom Fly Fishers BONANZA has recently closed it’s books on this the 9th year as one of SA’s leading fly fishing events. The 2019 Bonanza has once again matched the amount raised in 2018 despite the many challenges and changes this year had in store for us. The funds raised are donated to Helping Hands Dullstroom for the local epilepsy center “Sanel” as well as the local needy – all thanks must go to the amazing generosity of participants, sponsors and water owners.

John Hunter (the BONANZA event coordinator) Was this year faced with some very special challenges – Firstly how to somehow improve the fishing quality and the Bonanza experience for our competitors. To this end it was decided by the organizing committee to source some additional private waters. The local Dullstroom community and all our wonderful sponsors who supported the BONANZA were ready and willing to once again give with open arms. 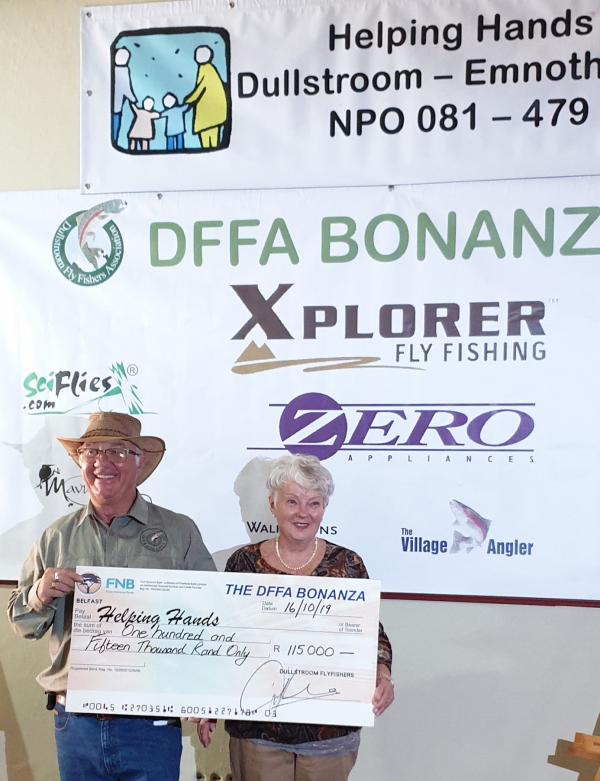 John Hunter hands over the cheque to Rosemary Smith

Starting with the fund raising task, the DFFA again handed over a cheque for R 115 000 to Helping Hands (Dullstroom’s own registered charitable organization).  Once we had our 92 competitors all signed up we were confident that we would once again hit our fund-raising objectives after operating costs for the event. Of course this was only made possible by the generosity of participants and sponsors who freely gave whenever they were called upon for fines, raffle tickets and auctions.  A special thank you goes out to all our competitors who boosted the funds raised by more than R 30 000 during the event.  We are very proud of our association with Helping Hands and delighted to be able to make this sizeable contribution to their good work.”   In her acceptance of the donation, Rosemary Smith (Helping Hands Representative) thanked the DFFA and all BONANZA supporters for their achievement and indicated her delight “ …. that the DFFA trusts Helping Hands to distribute their funds fairly and equitably.”  She also indicated the local causes that benefited from donations such as this – top of the list once again being Dullstroom Epilepsy Centre, but also including the Dullstroom Learning Centre, crèches, nurseries and the aged “ …… all will benefit from a donation of this magnitude.” 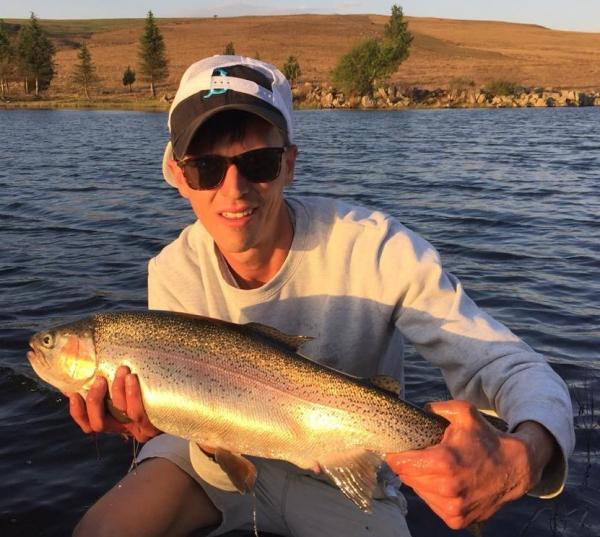 One of the fine trout caught

Back to the fishing , which can be summarized very simply …..

There were 480 fish caught over the four sessions with some really nice big fish coming out.  The prize for the 1st full card of ten fish, donated by Dave Hepworth was won in the first session by Kiran Siney fishing at Walkerson’s Production. His card was full at 09:54 A number of full cards were returned during the competition this year indicating the quality of the waters kindly donated to the Bonanza by our water sponsors.  We welcomed two new private waters on board this year…. Spring Valley Retreat, Santa Estates – Teal and The Glen, all of which produced some stunning fish over the two day event.

The four session winning fish were as follows: 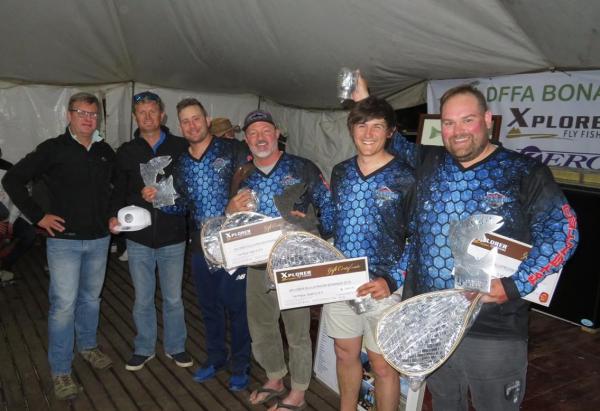 The principal results are summarized below:

Fishing conditions became more challenging as the sessions went by, with a few dams that did not deliver to their potential. The dam that fared best in the event was the Critchley Syndicate dam and Brett Jenkins was proud to have triumphed and scooped the Jan de Jager floating trophy for best water. Critchley was closely followed by Laverpa and the two Walkersons waters (Production and Raws Water), all three within two points of each other as voted for by our competitors. 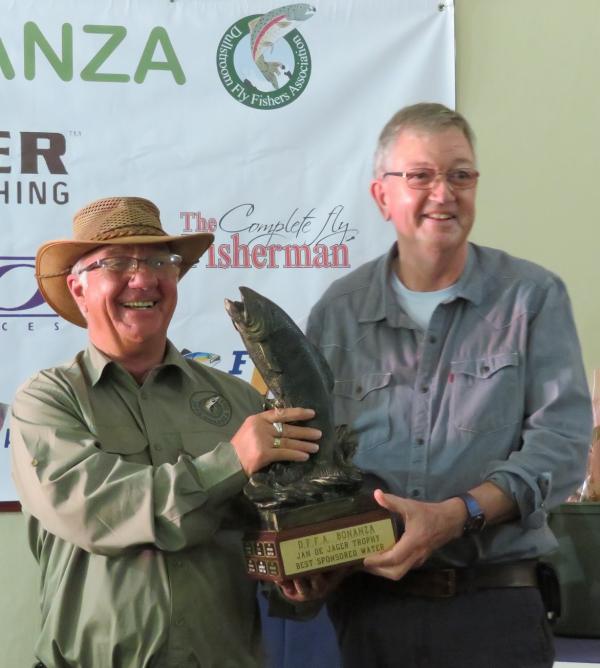 R250,000, principally from the main sponsor Xplorer Fly Fishing and their co-sponsors Zero Appliances. Our four session sponsors (The Village Angler, Frontier Fly Fishing, Mavungana and Walkerson’s ) once again did us proud with some wonderful prizes, as well as a host of other sponsors that contributed prizes, including feature prizes for first fish on a Mrs Simpsons fly, First full card of the competition and the “True Grit” award sponsored by Drew Kennedy as a tribute to brother Mike who passed on as DFFA Chairman a number of years back.  There have been some fitting winners of this award over the years, including tw0 development anglers, this year’s winner takes his fishing very seriously and spent more than a half hour at Spring Valley Retreat reviving a huge trout which sadly did not survive and as per the rules of the competition could thus not be counted.  Well done Alex Bidder – thank you for your integrity and honesty……we look forward to seeing you again in 2020!

A big thankyou to all our local Dullstroom sponsors.