FOSAF NEWS - April Fly of the month: The Blue Nissan by Andrew Fowler

The Blue Nissan is a catcher of large Trout.  Records, which are emerging are scant, and mostly out of focus and yellowed at the edges, but the evidence suggests that this fly does not catch small fish. Ever.

Now I must hasten to tell you that this is not my pattern.  In fact, the existence of this fly was not known to me until a certain Goose spilled the beans recently, but the fish catching properties of the inventor of the fly were near legendary, and now the individual’s secret is out.  It is a strange and mysterious story this, because the identity of the inventor, a certain “Squidlips” is itself a mystery.  His name harks back to the eighties when a certain “Krajewfsk” was often heard to mention this individual, usually late at night in pubs, where some people ate their whisky glasses….but that is another story.

Back to the fly.  There is but one picture of this fly in existence, and here it is: 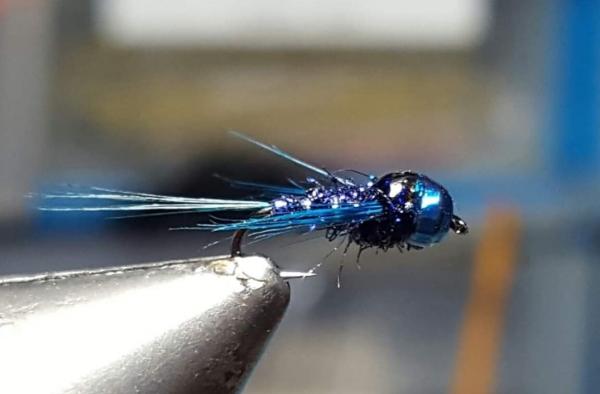 As you can see, the exhaust pipe of this thing (it is not co-incidental that Squidlips invented this fly in his place of residence, that being Smoketown) is straight as a die, and has a sheen to it. It is suspected that  black microfibets have been used, and you will see that it is tied long.  Then the load-bed is tied with a UV ice dubbing that shows it’s true blue under a UV light.  The tie downs are a clear, holographic tinsel, wrapped in even turns, and serving to secure the Blue Nissan, even when crossing the potholes on the Kamberg road.  (And that is saying something!). Just before the engine block, and protruding either side, are those there blue fibres.  Much Googling has failed to reveal their true identity, and the Nissan garage in Smoketown were little help in tracking down the correct material here.  It looks like one of those saltwater “fish hair” type products in a suitable hue.  Someone suggested that it might be that new age “flashabou”…the very fine, straight, shiny fibred one that Horrible sells in his shop. Perhaps the publishing of this piece might cause Squidlips himself step forward to correct me here on the true material to be used, and we can then all discover his identity!   Either way, this flash of blue colour is what you see when the Blue Nissan speeds past on its way to trophy water. Correction…this is what the Trout sees when the Blue Nissan speeds past.  Anyway…  ahead of these blue sides is a bit more of that ice dub, with a healthy dollop of that expensive tacky stuff on top.  What do you call it?  The stuff that never dries, or if it ever does, only in a particularly violent solar storm.  On to the engine block at the front.  That thing is solid tungsten. Hits the bottom of the stream with a loud clang.  Watch your ears when that comes past!  It is Re-bored, Silver colour, and heavy as hell.

Stick that Tonguesten in your cheek!

(Note.  Squidlips has not been contacted for the purpose of establishing any patents or copyrights on the Blue Nissan, its materials or its construction. Lawsuits are anticipated shortly. It could get messy