Recent rainfall has ended three years of drought in the NE Highlands, there were little windows during this period when the streams flowed and worked but falling levels soon put paid to any reasonable fishing. In January of this year one of those windows opened and we discovered numerous 3-4” fish as well as a range of other sized juvenile fish. One wonders when these little fish were spawned. When fishing the small fry hammered dries before they could drift to larger fish. The streams dropped over February with its localised showers and storms and we were blessed with widespread rainfall in March, and it still continues.

The timely, widespread rains put the Sterkspruit and Kraai out of action but the higher reaches of the Bokspruit, Bell and Rifle fished well. In fact we had too little water but enough fish and had to share beats. A beat that would normally host four flyfishers now had eight. Fortunately the better the fishing, the less distance one covers. The Bothwell and Birnam beats were sought after and certainly delivered the goods, in fact, over the festival period, 21 fish between 14 and 18”and one over 18” were recorded. It must be noted that participants were far more diligent about catch returns this year; maybe they had something to brag about? There were even a few “personal bests” taken.The catches were all rainbows with only two Yellowfish taken. The two little Yellows were taken on Francisdale, this is as close to the source of the Riflespruit that has produced Yellowfish in recent times. In years gone by they were regular visitors to the upper Rifle.

I have not seen the upper Bokspruit in this condition for at least three years, the bedrock and cobbled bottoms are scoured out and clean. Lower reaches are still a bit silted but with the continuing flow should soon scour out.

The vast majority of fish were taken on dry flies. A selection of Rab, pararab, stimulators and caddis patterns were most commonly used but personal favourites also found success. Those that persisted with Zaks and Guns also caught.

An amusing event occurred when returning from the upper Bokspruit on Tuesday afternoon, right by the Cleft Hill bridge over the Bokspruit, we encountered a roadblock. Fortunately the officials were very corrupt and we were able to pass after a brief whisky tasting. Light rain started falling and the roadblock was packed up. We drove up to the Bell river valley and only when reaching the Maartenshoek turn off did we see the scale of the cloudburst that we had missed. The causeway at the bottom of the hill was flooded and we parked waiting for it to drop. It soon did and a local farmer drove over showing us that it was safe to continue home. This cloud burst was of a very local nature, only affecting the lower Bell valley. Upstream waters were to be fine on the last day.

Thanks must go to the participants, most have attended previous festivals and a great camaraderie is developing. The guides as well, they offer their services for free; all are competent flyfishers, some are great fly tiers and their senses of humour add to the occasion

It seems that the drought is over, the upper reaches are looking the best that they have in recent times, there are numerous fish about in a range of sizes, rainfall is forecast to continue and as is usually the case – “you should have been here, next week”. We’re waiting. 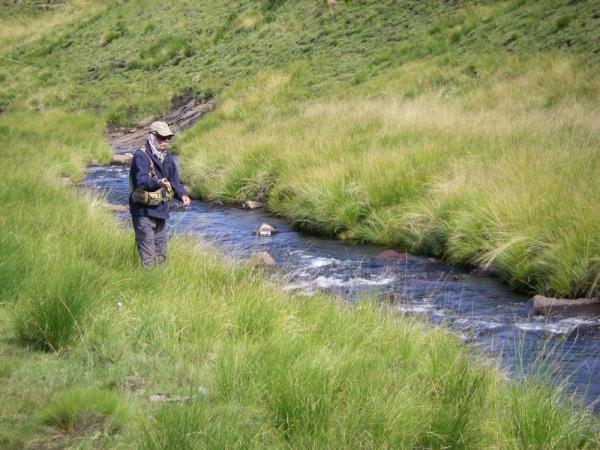 Duncan Moth on the upper Bell 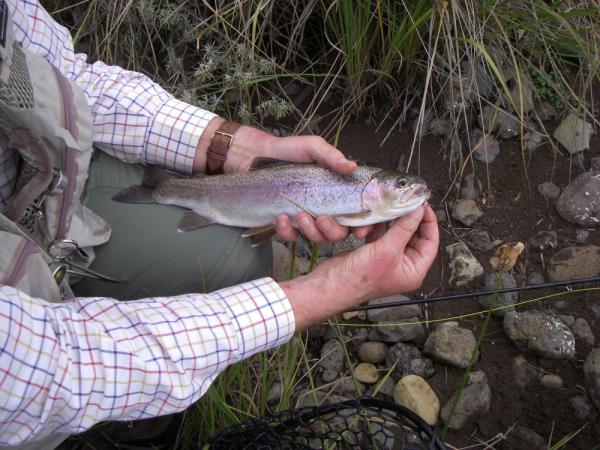 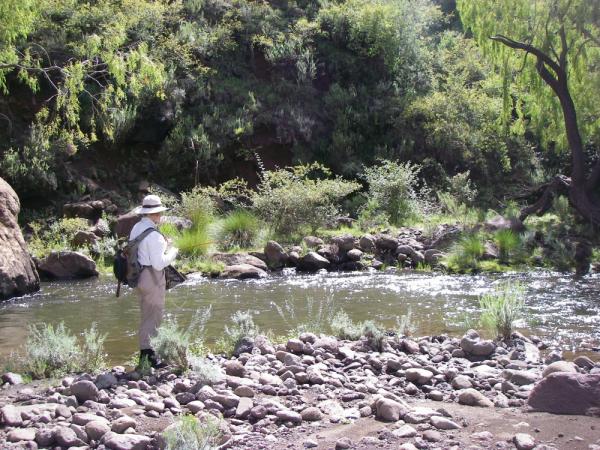 Heather Hamilton on the Bell