The Centre for Environmental Rights requested WPB Colliery to cease operations for the opening of an open cast coal mine near Dullstroom by Thursday 13th April. This was because they were committing numerous offences in terms of national, provincial and municipal legislation and the mine borders the newly gazetted Greater Lakenvlei Protected Environment of 14 000 hectares.

WPB’s lawyer’s response to CER’s letter was that the mine owners had not been advised that the water use licence had been suspended (this is not correct). Moreover, they were not prepared to consider the other allegations until later. The miner's lawyers stated that work would cease from 13 April to 19 April but WPB Colliery continued to work through most of the Easter weekend. The various parties opposing the mine therefore had no choice but to ask the Federation for a Sustainable Environment to approach the court for an urgent interdict. This will be a very costly undertaking but it is vital that this illegal operation be halted at an early stage. We trust that all conservation conscious people and those who wish to protect SA’s most important fly-fishing area will support us in raising the funds for court action. We are hoping that much of the money will come from our crowd-funding project. All you have to do is make your contribution in US$ and the system converts it to Rands. To donate please go to https://www.generosity.com/community-fundraising/we-have-to-stop-the-mining-in-the-dullstroom-area

Thank you for your donation and please share and distribute this message as widely as possible.

Latest news as of 20 April is that work at the site has been halted. This will mean that the urgent interdict scheduled for 25 April will no longer proceed on that date. However, normal court action will probably follow and we may still need to resort to an urgent interdict later. We have already incurred considerable costs in this matter so fund raising is still a priority. 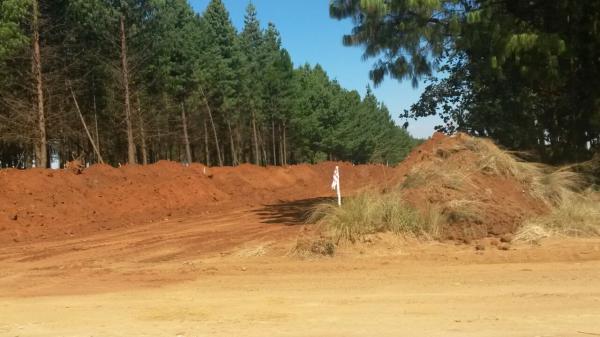 Some of the preparation for the mine