In September 2011 we can expect a surge of new applications to prospect or even mine in the Steenkampsberg which is the heart of the province's famous Trout Triangle.

What is very disheartening is that landowners and interested parties have already been involved for some years in countless battles to try and keep mining out of this beautiful and ecologically sensitive area. Although many of these battles have been won it has been particularly exhausting both in time and financial resources for those trying to conserve the area.

Although the future might look grim there may be some hope. On the 12th May a task team was formed to assist the Mpumalanga Tourism & Parks Agency (MTPA)submit a motivation in terms of section 49 of the Mineral & Petroleum Resources Development Act of 2002 (MPRDA). Section 49 of the MPRDA allows the Minister to prohibit or restrict mining in an area considered of exceptionally high terrestrial and biodiversity value. Apart from the MTPA the task team comprised representatives from EWT, Birdlife South Africa, WESSA, Mpumalanga Wetland Forum, FSD and FOSAF.

The submission was made to the Department of Mining Resources recently and it now hoped that it will be accepted and that the Minister will prohibit or restrict mining in the area, either indefinitely or for a reasonable period. However, it must be pointed out that if the application is successful it will take some time before this is published in a government gazette because among other things it will have to go through a public participation process. Despite this the task team, which has named this project ‘The Steenkampsberg Environmental Initiative', believe that it a worthwhile cause and it is probable that while the application is being processed that the DMR will warn the mining industry targeting the area that they will face stiff opposition.

The fly fishing industry must also realise that for the motivation to be successful it has had to be based on protecting the unique biodiversity of this area even though it does mention the economic benefits derived from tourism (probably at least 1 000 jobs) of which fly fishing is central. For this reason the area demarcated in the plan does not include the whole of the Trout Triangle, but it is quite possible that neighbouring landowners can apply to join at a later stage or even apply for a separate Section 49 determination.

For more information click here for our new Environmental section. 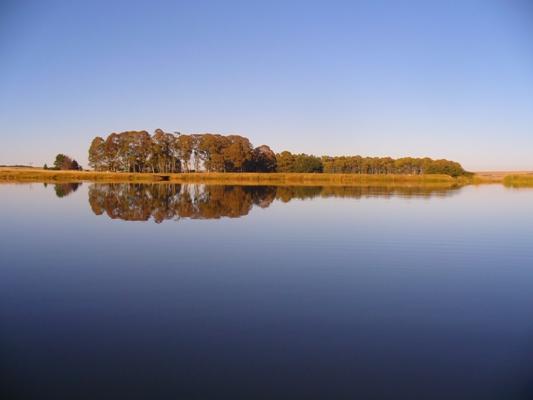 A traquil scene in the Trout Triangle