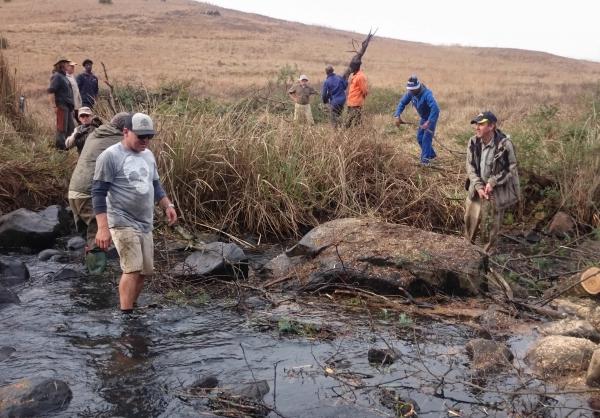 The Natal Fly Fishers Club held its third clean-up day on the Upper Umgeni River on Saturday 12th September. Unlike previous clean-up days the club hired in professional tree fellers to join the party of volunteers, and farmer Russell Watson, provided no less than four tractors to assist. With this considerable man and machine power, a highly successful and satisfying day was had.

Don’s tree fellers from Durban were there at 8:00 am and a deafening roar of chainsaws had begun before the first volunteers arrived!

One party of volunteers, together with the tractors, and most of the chainsaws were concentrated on a stretch of river approximately 350 metres long, that was severely choked with large and difficult trees on the southern bank in particular. The contractors worked tirelessly and cleared the entire stretch, with tractors dragging trees away from the river and stacking them in large piles. The volunteers helped with old logjams in the river and trees on the opposite bank.  This area is now completely transformed. The river is running freely in open sunshine! 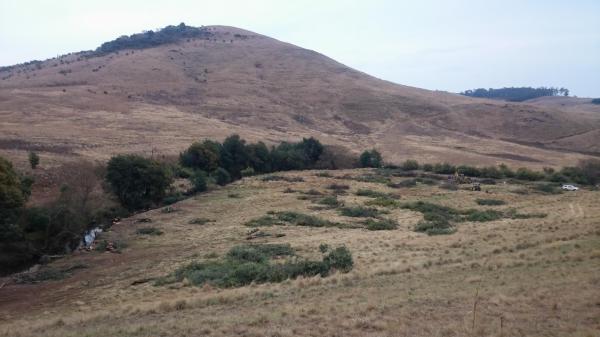 The second party of volunteers, with three chainsaws, ventured a little further up. Their mandate was to fell only trees that would not fall into the river, or if they did, could be removed by hand. This was expanded to include the removal of branches overhanging the river. Looking from afar their success was perhaps less dramatic. What they achieved however, was to open up and improve over a kilometre of river that is now eminently available to fly fishermen, if not completely clear.

This year’s first day (the second is to follow on the 17th of October), was significant in that there was a widespread publicity campaign around it, aimed at achieving enthusiasm, concern for the river, appreciation of it as a trout fishery, and more volunteers. NFFC members were joined by representatives from DUCT and WWF. A piece was published in the local “Midlands Chronical”, the hashtag #BRU (For Blue Ribbon Umgeni) was launched, and great momentum was achieved. Two weeks after the event Andrew Fowler released news of his first book, (Stippled Beauties: Seasons, Landscapes & Trout), and the fact that the proceeds of the collector’s edition will be spent on further clean-up days, such as the one held on September 12th. In the weeks following the day, several fly-fishermen visited the river, and while some had blank days, others caught lovely trout.

The stretch of river being targeted in these clean-up days runs from the NFFC’s Chestnuts beat above where the Dargle/Impendle road crosses the river, up to above Umgeni Poort farm, where the next public road crosses the river. The WWF is working on large stands of trees on several farms, where farmers have signed stewardship agreements. These block are largely away from the river itself, but their work is considerable and water flow benefits are likely to be significant. The NFFC is working on river banks on 4 farms on which it has access to over 11Kms of water, and some farmers are conducting clearing of their own volition. Collectively this means that virtually the entire stretch of river of relevance to flyfishermen (17 Km) is receiving attention. With enough energy and common will, it is not impossible that this stretch will be transformed between now and April 2016. This is a truly exciting groundswell from several organisations, working together towards a common goal.

We are close to witnessing a Blue Ribbon Umgeni, with better flows, cleaner water, and better access for flyfishermen. 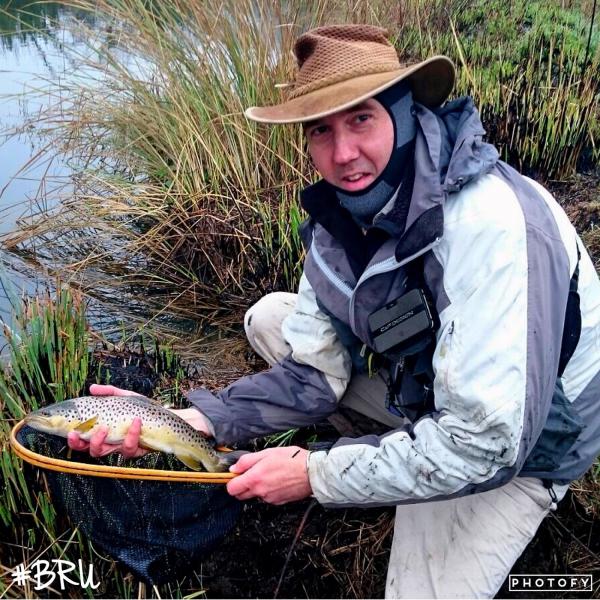 Andrew Fowler with a good brown caught after the clearing.