FOSAF NEWS - A tribute to Dave Walker by Tony Kietzman 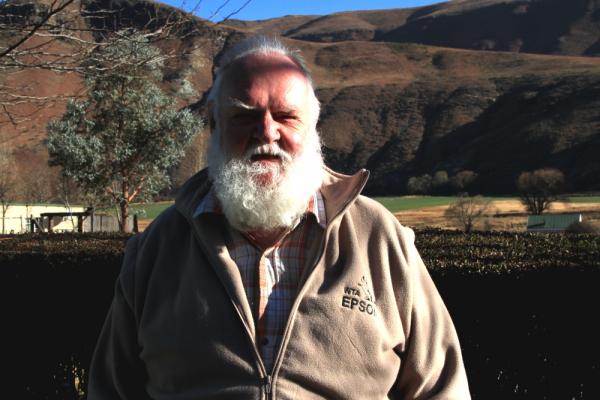 I would like to start this article with a disclaimer; I apologise for any factual inaccuracies (facts were gathered from conversations over the years, often in the pub) and the fact that this may look like an obituary.

David Walker was raised in Bloemfontein where he attended St Andrews College. He then had an incomplete university education, he dropped out due to his political activities (he actually has “Struggle credentials”), took a gap year or two and then took himself off to Glen Agricultural college. He was later to use the skills learned to grow and can asparagus in the Ficksburg district. He still grows a small crop of the best asparagus that I have ever eaten.

At this juncture he got involved with service clubs and the Toastmasters, he can speak publicly and has been known to string together more coherent conversations than- “Don’t forget your lunchpacks”

Dave first appeared in Rhodes at the behest of Basie Vosloo. I believe that they met sometime in the 70’s; Daveinformed Basie that he was keeping trout in his parent’s swimming pool, Basie then said something along the lines of “we got real trout where I come from, come see.” Dave then visited the area for the first time. With farmers buying out their neighbours the dwellings on newly acquired properties were lying unused. Basie saw the potential and invited Dave down to come and renovate some of these properties and Gateshead Lodges was born, making farm accommodation and the fishing available to members of the public.

He together with Martin Davies and Basie Vosloo were among the founders of the Barkly WTA.

I first met Dave when I came down to attend the first Barkly Wild Trout festival in 1991. This organisation was established by the riparian land owners to make their waters available to the paying public as an alternative to syndication. This was later to become the Wild Tout Asssociation and Dave was the one doing most of the work.

The area and its people were a revelation and I was soon to return, firstly with my wife and later to spend family holidays over the next decade. In fact I would regularly get down on my own whenever I was able to afford the trip.

After his stint establishing Gateshead lodges Dave got involved with the building of Tiffendell, the ski resort. The premises that some of the workforce lived in was originally the local school hostel. He ended up owning the premise and this was to become Walkerbouts Inn. The building was added to and continues to expand. Walkerbouts has become an up-market hostelry.

Dave got actively involved in the local community and at one stage was even the Mayor. At present he chairs the local residents and ratepayers association. To ensure the survival and viability of the area and local businesses Dave starting a local tourism forum. I don’t hesitate to state that he single- handily did more to promote Rhodes than any other individual.

Dave even had a brewery, long before craft beer became fashionable. His “Rooikat” was a fine ale. Unfortunately the local market was too small to support this venture and he sold the equipment.

In years gone by, he made regular annual visits to the Hooked-on Fishing shows held on the Reef where he manned a stand marketing the WTA. These have now turned into flyfishing only events which have also been participated in.

One of the area’s main attractions is the flyfishing and Dave was able to establish a relationship with Bells Whisky resulting in their sponsorship of annual WTA festivals. These events grew in size and stature over the years. The festivals are now sponsored by Epsom and run solely by the WTA. These gatherings began as parties of note but gradually quietened down and a limited number of participants now return year after year. One of the fundamentals of these festivals is that participants should be guided and exposed to waters that they have not fished yet. Half will return next year and many visit with family and friends at other times of the year.

So what has Dave done for flyfishing?  He has administered and grown the WTA by attracting new members who open their waters. This has even led to the establishment of alternative associations like the “Big Mac” group of river owners. Initially the WTA had a membership stretching from Lady Grey to Maclear and even Dordrecht. Spread over such a large area the organisation became too cumbersome. Remnants of the system still exist, and visitors have access to waters in those areas. At present Dave is trying to get the Barkly East society to open their water on similar terms to the WTA. Consummate writer, that he is, Dave has compiled the WTA handbook that is updated every year. This is a comprehensive and bulky tome of word class quality. Dave pretty much runs the WTA nowadays and takes most of the executive decisions. Amongst these decisions has been to use WTA funds, generated by rod tickets and events, to contribute to the war chest for fight to save trout from misinformed and dubious decisions made by the government in its efforts to eradicate trout. Dave certainly has done his part to put Rhodes on the tourism map and onto a lot of peoples bucket list. He provides a service as a local host. Attracts and hosts journalists who come and explore the area and later write about it.

To sum it all up, Dave’s legacy must surely be the Wild Trout Association.